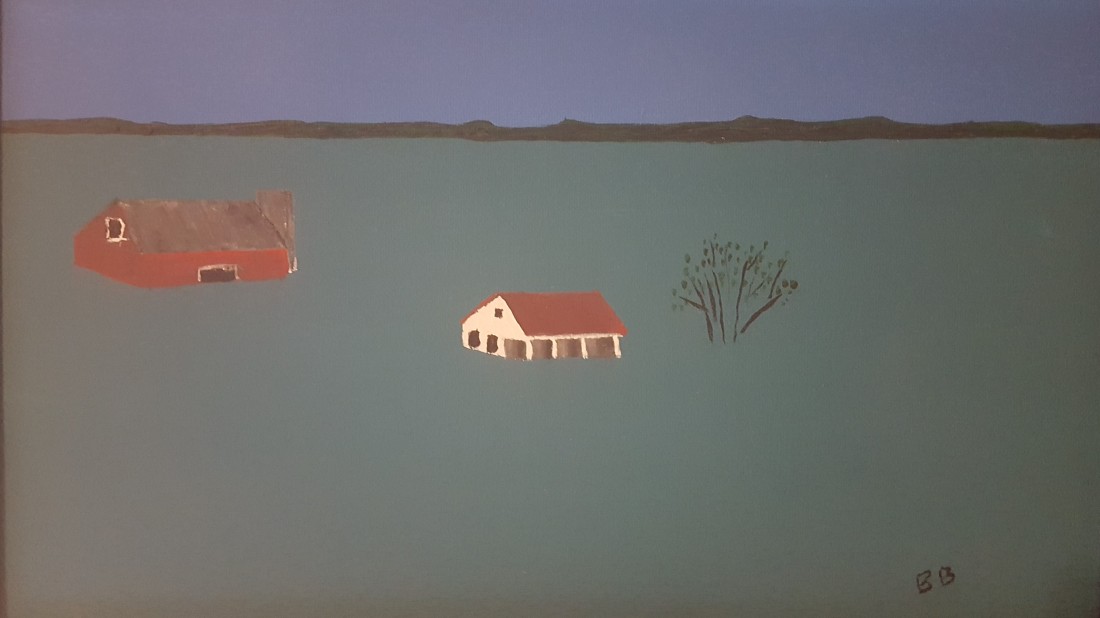 In April 1965 I stood on a levee with my Grandpa and watched some National Guardsmen building a sand bag wall. The Mississippi was only a few feet away, brown and angry from a long winter with record snowfalls and a fast, hot spring.

We turned and walked back across Tama Road to my Grandparents house. There was a green flat bottom aluminum boat laying in the front yard. It was chained to the pecan tree there, where I had a tree house built. I liked to sit up in that tree in the summer and read.

Grandma was in the house packing up the last of their belongings. My uncles had come this weekend and moved all of the furniture upstairs in the house, and into the hayloft in the barn. All of the tractors and farm equipment and been taken away to the higher ground several miles up the road, across the paved highway. We put their stuff in the car and drove toward town. They had rented a house in town high above the low farmlands all around. That night while I watched the moon cross my window the levee breached about a quarter of a mile from the farm.

In June, after school was over, my mom drove me back to Burlington. The bridge on Tama Road was out, and my Grandpa met us there in the green boat. We motored through the drainage ditches into the lake across the road from their house. There we tied the boat and walked to the house. Grandpa had driven the Case and pulled a grain wagon several miles out the highway to the other end of Tama Road, then worked his way back to the farm the day before. There was still a lot of mud and water, and it had taken all day to do it. My job was to shovel the plaster and lath Grandpa tore down out of the window by the fireplace into the grain wagon. We dumped it into a ditch by the big culvert way out in the back.

The well was somehow ruined, and we had no water. We drove a pipe into the ground by the back porch and pumped our water by hand until the well man could come and drive a new well or whatever needed to be done.

I began to explore the fields. No crops had been planted because it was too late, and too wet to get them in. I took the lawn tractor and a chain and dragged all of the debris I could find up to the barn, or out to the dump spot in the back ditch. Floods leave a lot of things laying around. In April there had been thirteen feet of water over the fields. In July there was four inches of gray, hard mud that cracked and curled. And smelled a certain way, not good or bad, but unique.

Now there was time for fishing. There were ditches all through the farm to drain the fields, and we had always fished in them. It was different now. Strange, really big fish from the river had become trapped in the ditches. It was scary sometimes.

In the evening we sat and listened for the soft murmur of the corn growing. But this summer we couldn’t hear it. Grandpa was really quiet then. I thought he missed the corn.

In December of 1975 our family was gathered at the farm, like we always seemed to do when I was little. I still don’t know where everyone slept, or how we even fit into the house. And why did lime Kool Aid taste the way it did in the aluminum pitcher?

Grandpa was retired from farming and most of his land was sold. The barn, the machine shed, and the big garage had all been torn down. The silo stood by itself at the back of the yard. It didn’t have a roof on it. I don’t remember it ever having a roof on it. All of the fence rows and red wooden gates were gone, and most of the lanes. The farm seemed like just a two hundred acre corn field now, with little interruption. Grandpa seemed quieter now too, and less defined.

I walked out into the field. I walked past where my grand parents had once found some very lush pot plants growing in the pecan grove. Grandma had looked up marijuana in a book, and there was apicture. I remembered where Grandpa and I had to pull a sheep from knee deep mud. That was where I learned a lot of my most colorful language. I walked by where Grandpa would lay down and die one day soon. I stood by the culvert where I had laid my uncle’s brand new rod and reel down on the ground so that I could pee into the water, just as a fish took hold of my bait and swam away, with the rod and reel. I went back to the white house with the red tin roof.

After dinner, everyone was doing what families do at times like this. I was looking through a stack of National Geographic magazines. On the back cover of one was a picture of a white house with a red tin roof and a barn standing defiantly above a flat, endless sea of water. And the top of a pecan tree in front of the house. It was an advertisement for Caterpillar, and there was the farm, under water, in the spring of 1965.

The next time I was in that house was over seven years later. Grandpa was dead, and I had not seen him in that whole time.

In August of 1982 I sat with Grandma in the yard. We buried Grandpa that week. She knew he was gone before she went out to look for him behind where the barn once stood, by the ditch. She had seen his white shirt laying in the green weeds, and then gone back to the house to call the sheriff.

In July of 1988 I went to Burlington to bury my Grandma. It would be the last time I myself, or any of the rest of the family would be in this place. I sat on a bed upstairs near the attic door with a box of my Grandparents life.

I had slept in this upstairs room many summer nights when I was young. Falling asleep to crickets and the low whisper of the corn growing on a hot night. Waking up there was wonderful too. The splash of fish in the lake across the road, the squawk of the blue herons. Car wheels on the gravel road.

The box had pictures of people I didn’t know, and some I did. In the bottom of the box was a dusty frame. It held a cut out of the Caterpillar advertisement from National Geographic. The picture of the farm during the flood. I wiped the dust from the glass. My fingers felt damp. I put my hand on the glass again. My fingers were wet. And now I could smell the river, and the mud it had left 4 inches deep over the whole farm over 20 years before.

Now I was standing in the gravel driveway, and my grandpa was coming up the lane on his Case tractor. He stopped and I climbed up on to the seat next to him. This was when I noticed that I was a young boy again. We went out into the field next to the house, and he dropped the plow and we went off across the dirt in a straight line, to the end of the field. Grandpa turned the tractor around and we went back the way we had come. When we reached the house again he stopped the tractor and helped me down. We went into the house where Grandma was frying fish, into the bathroom to wash up. I stuck my little hands under the faucet and Grandpa dropped the soap in to my hands.

I was sitting back on the edge of the bed again, alone. I went down the stairs, out into the yard, and sat in a metal chair in the shade.

View all posts by walkingdudestories